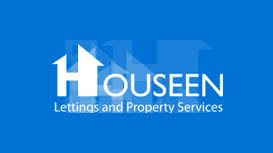 Good house and the letting agency was really professional, but we were without a washing machine for over 3 weeks which was very inconvenient, and it took lots of phone calls to get anything sorted

Houseem have a high professional standard of service. My complaints would be regarding the time it takes for problems to be fixed!

No problems with that agency. Rented a neat cozy studio downtown for a respectful price. Electrical appliances were included, although I had to buy the furniture.

Was assured my window would be replaced within 2 weeks of moving in to the property… 6 months later I am still waiting.

Really pleased with the apartment that I have rented from this agency. From seeing the property to moving in took three days. Staff were friendly and helpful.

told us we couldn’t move into a property one day before we were meant to move in. no communication, no help. complete amateur hour, avoid at all costs! took £1200 of us

Agent was OK there response times to problems was quick.

I would suggest to anyone to AVOID this agency. In my experience with them, they have shown to be unprofessional and incompetent. They are not part of any professional body or protection scheme (as of Spring 2013), so you’re on your own if anything goes wrong. And given how absent minded they can be, things will probably go wrong. In my case an appliance advertised online and put *in the inventory* was missing. When they were informed about it they apologised for their oversight but said they cannot do anything about it! In my case it was a small freezer, so nothing too critical, but it’s a matter of principle and I believe this to be unacceptable. As my tenancy was approaching its end and I had confirmed I will be vacating the property, Houseen understandably put ads on-line to advertise it to new potential tenants. However, they AGAIN managed to put the wrong information in the ad (regarding that freezer)! Not sure if this is simply unprofessional absent-mindedness, or actual attempt to mislead potential tenants. They also were advertising the property as available before the time I was due to return the keys, of which I had to remind them as well. I DO NOT recommend this agency.